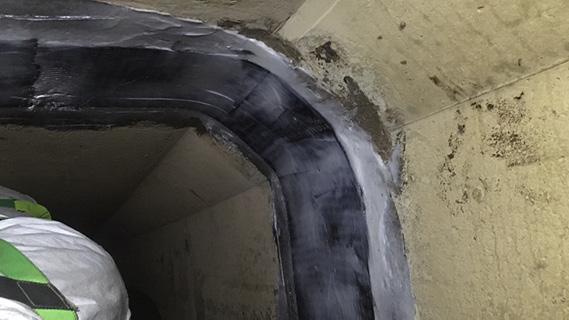 The Village of Zoar, Ohio was founded in 1817 by 200 German separatists seeking to escape from religious persecution in their homeland. The village thrived for over 80 years as one of the most successful communal settlements. The village is surrounded by levee walls to protect it from flooding caused by the Tuscarawas River and its tributaries. However, water which flows into the town must be able to flow through the levee walls.

This is accomplished via a system of 36-inch square concrete box culverts which were poured in 20 to 25 foot lengths. The levee system is owned, operated and maintained by the US Army Corp of Engineers. This project initially bid as a cured-in-place pipe (CIPP) project. However, no truck access was allowed on the levee walls and it was not feasible to move equipment and liner to the inversion points. So, no one submitted a bid for the initial letting. A meeting was set up on site with the prime contractors, Army Corp personnel and Aegion personnel. The difficulties of building the project as a CIPP project were discussed. The Army Corp did not realize that in order to line a square pipe, it had to be transformed into a "round" structure and agreed they could not afford the loss of capacity in the pipe. The discussion then turned to what issues inside the culverts needed to be fixed. They mentioned some of the joints were coming apart and they were worried that sink holes would begin appearing in the levee and they needed a solution. Carbon fiber reinforced polymer (CFRP), manufactured by Fyfe Company was the perfect solution. The project was rebid and the Tyfo® Fibrwrap® CFRP system was specified. Aegion personnel provided preliminary designs and specifications to the Army Corp for inclusion in the bid documents.

Site preparation and bypass pumping of the creek water and storm flows was provided by the prime contractor, Massillon Stone Company, which utilized an 8-inch dry prime pump and 8-inch irrigation piping. The pumping system had to overcome a 150 vf levee wall to force the water from the base of the levee wall to the top of the levee for discharge. The trenchless repair was performed by entering the line and hand applying the Tyfo® Fibrwrap® CFRP system.

Joel Reott, Project Manager at Massillon Stone, said, “The Fibrwrap crew was easy to work with. We worked together as a team very well and I appreciate the crew’s efforts. We would absolutely use the Fibrwrap® system on future projects.”

Chief Shane Hall, PE, Contract Management Section for the US Army Corp of Engineers, said, “Interesting product. I can think of many applications we can use that fiber on in the future.”

The project was successfully completed to the satisfaction of all parties in February 2017.