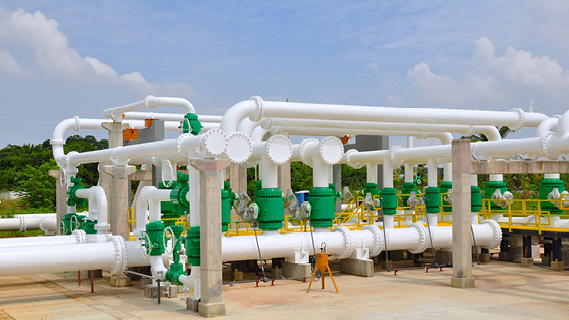 The Tuzandeptl Strategic Hydrocarbon Storage Center(CAE-Tuzandeptl) is an underground salt cavern storagefacility that uses brine to receive, store and deliver excesscrude oil production. The facility plays a vital role in providingPemex with operational flexibility. It consists of 12 undergroundcaverns with a 7.1 million barrel storage capacity and 2 brinedams with a holding capacity of 12 million barrels. When crudeis deposited into the caverns, brine flows from the caverns to thebrine dams. The reverse occurs when crude oil is taken out of thecaverns. A brine pumping station directs the flow of brine to andfrom each salt cavern, and a brine discharge system directs theflow to and from the brine-holding dams. This system is designedto displace large amounts of crude oil and brine in a short periodof time, with 16-inch pipelines going to each cavern and 36-inchdischarge pipelines going out.

With average sodium chloride concentrations in brine of26 percent, the corrosion rate of carbon steel can exceed200 mils per year (mpy) depending on flow rate and temperature.The Tuzandeptl facility was originally built of bare carbon steelwith a substantial corrosion allowance to take into account theexpected wall loss due to the corrosive and abrasive natureof brine used. The corrosion rate is further exacerbated byturbulence in the flow streams, explaining why a facility likeTuzandeptl would be prone to high corrosion rates. After yearsof operation, actual corrosion loss far exceeded the initialdesign of the system. This created integrity problems thatstarted to compromise the operational reliability of the facility,requiring regular replacement of pipe sections and servicedisruptions due to leaks.

After analyzing various alternatives, a total thermoplastic coatingsystem was selected as a comprehensive long-term solution.A complete reconfiguration project was launched in 2013, andthe new facility was commissioned in 2016 to yield a solutionthat will provide Pemex with years of trouble-free operation.

One of the key benefits and appeal of the Tite Liner® thermoplasticsystem is the ease of installation in new and existing pipelines.First, interactive, tight-fitting thermoplastic liners are customsized so that the outside diameter of the liner is larger than theinside diameter of the host pipe. The liner pipe is then deliveredto the jobsite in 45-foot sections that are thermally fused into long monolithic sections equivalent to the pipe section beinglined, up to 6,500 feet in length.

Field installation of the Tite Liner® system is achieved bysectioning the pipeline and inserting fused liner sections.A blow-down pig and sizing plate attached to a steel cableare blown down each section of the host pipeline. The rollerreduction box is used to compress the liner in order to providesufficient clearance to pull the liner through the host pipeline.Once the liner is pulled through, the material expands andlocks itself inside the pipeline providing a tight compressionfit. Although the resulting inside diameter is somewhatreduced, the flow characteristics and transport capacityof the pipeline are not affected due to the smoother surfaceof the thermoplastic compared to bare steel.

To reconnect the lined pipeline sections, various connectionmethods are available, which include flanged and flangelessconnections. Once the system is reconnected, the pipelineis tested and recommissioned.

Rotational molding, or rotomolding, is a process where a thinlayer of thermoplastic material is applied onto the interiorsurface of the fitting to provide a smooth corrosion- andabrasion-resistant surface. For in-plant piping, wellheads,headers and other piping systems where a straight liner pipecannot be installed, a thermoplastic coating can also be appliedthrough the rotomolding process. This creates a seamlessone-piece, thermoplastic coating that can be applied to complexgeometries, large pipe assemblies, tanks and process equipment.

During the application process, rotational-grade polymerresin in granular form is placed inside the metal fittingand heated while being rotated simultaneously about twoperpendicular axes. During the heating cycle, the polymerparticles melt and adhere to the metal fitting, forming a thin,uniform layer of seamless thermoplastic coating less than1/3 inch thick. This coating thickness makes rotationallymolded coatings extremely durable and resistant to abrasivewear. The metal fitting is then cooled by a combination offorced air and water mist and the part is then removed fromthe machine. Finally, coated end connections are machinedto tight tolerances and finished to be fitted and assembled withother coated fittings, forming a complete corrosion-resistantpiping system. Rotomolding is part of Aegion’s corrosionprotection solutions through its strategic partnership withRMB Products, Inc., of Fountain, Colorado.

The Tite Liner® system was designed into 150 sections between10 and 3,200 feet in length, and ranging in size from 4 to 36inches in diameter. Engineers employed a computer-generateddesign to drive the fabrication, fit and installation of a complexseries of pipeline spools and fittings of various sizes, whereeven the slightest dimensional variation could impact properfit of the entire system. The general contractor then fabricatedthe steel fittings, and Aegion coordinated the fitting of thesystem spools and pipelines.

Because of integrity issues and continuous leakage problems,the first phase of the project addressed replacement of brinepipelines connecting the dams to the pumping station. Forthe second phase, 450 spool pieces were rotolined and theninstalled on site. Once the redesigned facility was completed,a system switchover was executed over a one-week periodwith the new system successfully commissioned in May 2016.

Given its complexity, execution of the project involved carefuland detailed planning and coordination by Aegion betweenPemex’s design engineers, RMB Products, Inc., the fabricationcrews and the field installation team. With the successfulcompletion of this project, Pemex ensured the integrity of theTuzandeptl brine handling system by eliminating recurringcorrosion concerns and potential leaks for decades to come.