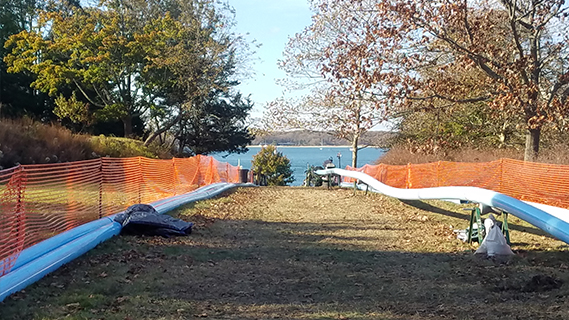 Before Hurricane Sandy hit the New York coastline in 2012, the residents of Shelter Island, an idyllic community at the easternmost tip of Long Island, felt that their power infrastructure was well protected. At the time, Shelter Island had three circuits providing power - one of which was known to be inadequate but provided some back up capability at peak power use. Sandy destroyed one of the two remaining circuits and left the island with no adequate back up circuit. This was especially problematic in the summer months when demand was at its peak.

Long Island Power Authority acted quickly to resolve the issue and obtained the funding and permissions to replace the line under the Peconic River and Pipers Cove using horizontal directional drilling (HDD) methods. The HDD process would be used to install three conduits under the water, each of 3,300 feet long, from Southold to Shelter Island. However, this initial installation was a failure. The original drilling contractor used a high-density polyethylene (HDPE) conduit and attempted to install all three conduits in a bundle in the same 36-inch bore hole which got stuck during the installation. The HDD had to be abandoned, and the project had to be shut down. A new approach was necessary.

Learn more about the project.