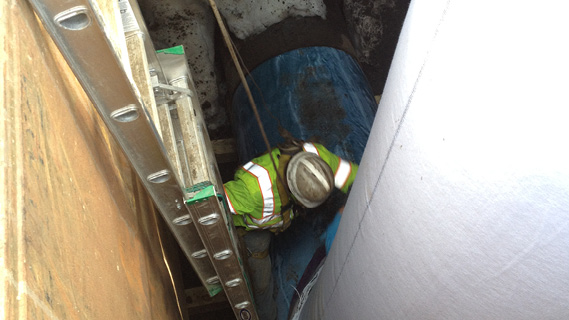 In Spring of 2014, Reading, Pennsylvania needed to upgrade the capacity of 42-inch force main running beneath the Schuylkill River. Working with Entech Engineers, the city devised a solution with a multi-faceted approach.

CIPP under riverFirst, PACT Construction would construct a new 42-inch pipeline beneath the river using the HDD method. This new pipeline would serve as the new main line. The length of the existing 400-ft. steel pipe force main would then be rehabilitated using two separate methods and serve as a standby tie-in to the system.

The pipe required two separate methods due to two 45° bends in the system. The straight portion of the pipeline was rehabilitated using Insituform’s InsituMain® CIPP system. InsituMain® CIPP is a fiber-reinforced liner for pressurized piping systems.

The bends were rehabilitated by Fibrwrap Construction using the Tyfo® product. The Tyfo® system uses a fiber-reinforced polymer (FRP) to provide added structural strength to a variety of infrastructure, including buildings, bridges and pipelines.

The combination of multiple applications, including HDD, fiber-reinforced CIPP and FRP provided a structural solution to existing pipeline and doubled the capacity of the system as a whole.

This project received an Honorable Mention for Trenchless Technology's Rehabilitation Project of the Year.