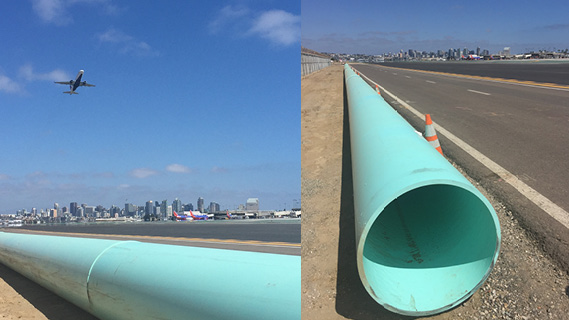 San Diego, California had a prominent start in aviation, serving asthe manufacturing and test flight grounds for Charles Lindbergh’sSpirit of St. Louis. In 1927, he took off from San Diego with stopsin St. Louis and New York before his historic transatlantic flight toParis. Shortly thereafter on August 16, 1928, the City of San Diegodedicated Lindbergh Field at the San Diego Municipal Airport. In1942, the 8,750-foot runway was added to accommodate the heavybombers manufactured in San Diego that were departing for WorldWar II battle fronts. This runway made it one of the first airportsprepared for commercial jet airliners. It’s now the busiest singlerunway airport in the nation.

Because the airport is only three miles from downtown San Diegoand is hemmed in by the San Diego Bay, Interstate 5 and the MarineCorps Recruit Depot, space is at a premium. The airport authorityneeded to improve its ability to capture and redirect storm runoff.The plan designed by Kimley-Horn required a new pump station inconjunction with new 35-inch gravity lines and 30-inch force mainsthat would tie back into an existing 60-inch storm water line. Allwork was to be completed either adjacent to or underneath theactive runway and taxiways. In addition, a 900 foot microtunnelbore was needed to cross beneath one of the taxiways.

Orion Construction of Vista, California was awarded the project, andelected to use Fusible PVC® pipe for several portions since it waspermitted for use wherever PVC was specified in the plans. A microtunnel boring machine crossed under the taxiway at a depth of 15feet to install a 42-inch steel casing. A 30-inch Fusible PVC® pipewas then fused in the same pit and pulled through as each joint wascompleted. Casing spacers were added between the Fusible PVC®carrier pipe and the steel casing as well as a low-density cellular groutto lock the carrier in place.

The rest of the pipe was installed in open-cut trenches. Because theAirport sits next to the San Diego Harbor at an average elevationof 17 feet, managing the shallow water table was a constantchallenge. Additionally, while many of the existing utilities weremapped, Orion Construction encountered several that were unknown.Orion Construction again chose Fusible PVC® pipe for the portionsof the force main that required restrained joints. Orion used thefully restrained, fusion-joined Fusible PVC® pipe joints instead ofexpensive, metallic, mechanical restraint harnesses, which requireextensive protection in areas susceptible to corrosion.

Despite the active airfield work environment, high water table andextensive utilities encountered, the project was very successful andwas awarded the APWA’s Project of the Year for 2016, in large partbecause of the effective planning and communication between theAirport Authority, Kimley-Horn and Orion Construction.