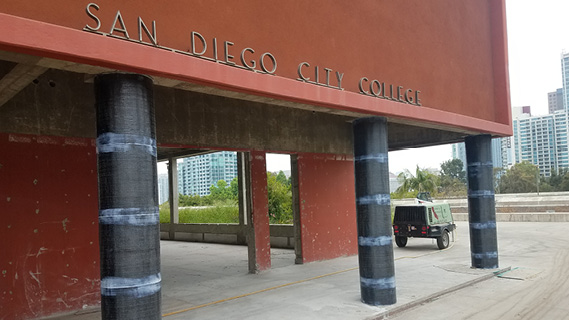 The San Diego City College main campus is in the heart of the City of San Diego and is a two-year community college in the San Diego Community College District (SDCCD). A multiple-building renovation project included structural reinforcement of two 3-story classrooms and office buildings and one dining facility. The three campus buildings were fully redesigned and renovated to meet current mechanical, electrical, architectural and structural requirements. Because SDCCD is a state-run community college district, design and construction projects are reviewed and approved by the California Division of the State Architect (DSA).

The Tyfo® Fibrwrap® system was designed by Fyfe Co. and approved by the DSA and the engineer of record, Hope-Amundson. The fiber-reinforced polymer (FRP) materials have been approved by DSA on previous installations at SDCCD. In this instance, Tyfo® SCH-41 FRP materials were designed and installed to provide structural reinforcement of columns, beams, joists and slabs. While advanced FRP composites have gained wide acceptance with national and international codes, principally ACI-440.2R-08, there are still various structural rehabilitation options available to the structural engineer when reviewing their analysis and design activities.

Adding shear walls for seismic enhancement and installing new steel elements around openings was one alternative reinforcement method that was considered. However, using FRP materials offered several advantages for SDCCD, including:

A robust Fyfe test report library contributed to DSA approval for the use of Tyfo® SCH composite anchors. Tyfo® SCH is a custom, uni-directional carbon roving for improved end details and force transfer. It was used on this project to develop tension into intersecting elements when conducting slab opening trim reinforcement and flexure strengthening. Similarly, Tyfo® SCH composite
anchors were also used to fully confine column perimeters that were not completely accessible.

Kyle Carter, Project Engineer from Hensel Phelps, said, “From the pre-construction and design phase all the way through the FRP construction activity, Fyfe Co. has been a superior organization to work with. Whether it be from an aspect of office or field involvement, each individual I’ve personally worked with has been very competent with the Tyfo® Fibrwrap® system. They meet or exceed our quality and safety standards and they possess a sense of urgency and genuine concern to work through the challenges this project has presented. Fyfe Co. has been a pleasure to work with and I’m confident Hensel Phelps will continue to reach out to them when their services are needed.”