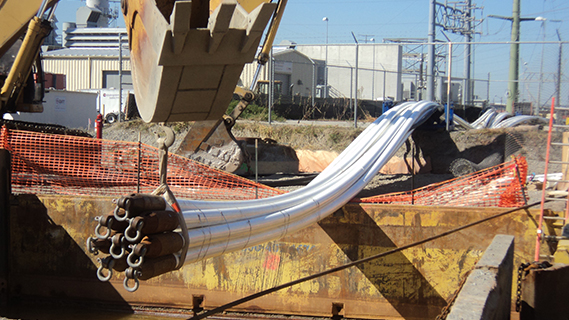 A major New Jersey utility has made reliability investments of nearly 6 billion dollars in the New Jersey power grid in recent years. A large portion of this funding goes toward installing new transmission lines. This same utility undertook the Jersey City Reliability Project to strengthen the grid and add resiliency. Two new 69 kV circuits were added, and for one portion of the alignment, a major river crossing was required. The most optimal installation method to cross the river was to horizontal directionally drill (HDD) under it and install a casing and conduit bundle. The alignment for the HDD was 53 feet below the bottom of the river channel which is 38 feet deep and 10 feet below the grade of the river banks. The project was complicated by the proximity of the alignment to the piers of a highway bridge crossing and the exit for the drill came very close to the utility’s own substation infrastructure. This was a major concern since the facility remained active throughout the project.

The HDD was 1,900 feet long with a casing pipe and conduit bundle installed inside it. Initially, the design engineer, Mustang of New Jersey, called for a 36-inch steel casing containing a bundle of eight, 8-inch high-density polyethylene (HDPE) conduits. After consultation with the HDD contractor for the project, Scott Murray of Carson Corporation, and Underground Solutions, Inc., the team determined that Fusible PVC® pipe would be a better option for the conduit bundle. The greater strength to weight ratio of a Fusible PVC® conduit means a smaller outer diameter for a given inner diameter and required physical characteristics compared to commensurately sized HDPE conduit. A smaller outer diameter for the conduit bundle afforded a reduction in the casing diameter size to 30 inches. Costs and risk for the HDD installation were reduced by using a smaller casing, including less reaming passes, less drilling fluid, and less time onsite.