The Neil A. Armstrong Flight Research Center is an aeronautical research center operated by the National Aeronautics and Space Administration (NASA). The primary campus is located inside Edwards Air Force Base, which is in the Mojave Desert alongside a dry lakebed in southern California. The location provides a hard surface for a natural extension to the runways and the remoteness of the air field creates an ideal location for supersonic flight testing. This is where Chuck Yeager first broke the sound barrier.

The research center needed to replace some of its aging water lines and increase the water pipeline sizing due to anticipated future facility expansions. Most of the installation was planned to be completed with direct bury, trenching methods. However, there was one location that would be costly to excavate. This airfield served as an optional runway landing for NASA's space shuttles and has a hangar designed to house the convoy vehicles and equipment that would handle the shuttle in preparation for its return to the Kennedy Spade Center in Florida. To withstand the weight of the equipment, the hangar sits on a 16-inch pad of concrete leading to the runway. Because cutting and repairing the concrete pad would be costly, NASA elected to install the replacement 4-inch PVC water line by horizontal directionally drilling (HDD) underneath the concrete pad. 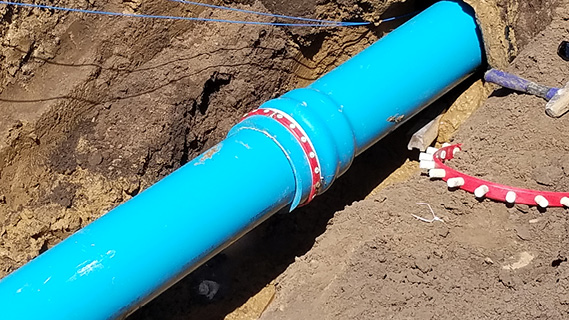