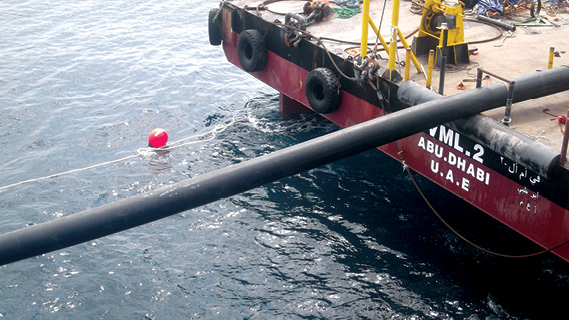 In 2013, Occidental Petroleum of Qatar Ltd. (OXY) was engaged in the further development of the Idd El Shargi North Dome (ISND) and Idd El Shargi South Dome (ISSD) oil fields, offshore Qatar. The production is routed to Halul Island where the water is extracted from the product. The facility handles this produced water on Halul Island, which is disposed of through a subsea pipeline from the onshore plant to the re-injection well 2.5 km (1.5 miles) offshore.

Due to an increase of production at the Halul Island facility, the existing pipeline no longer had the required capacity and needed to be augmented with an additional pipeline. The proposed pipeline comprised 8,200 feet of 24-inch carbon steel pipeline with a corrosion resistant and compression-fit high density polyethylene (HDPE) internal lining.

A unique feature of this project was that it was necessary to insert the HDPE liner in one continuous length of 8,200 ft. from an offshore platform to the onshore pipeline connection. This length was the longest Tite Liner® installation ever attempted and successfully executed.

Valentine Marine Gulf LLC (VMGL) contacted USTS to provide a solution to install this single shot section using its Tite Liner® technology. The ability of USTS to provide the latest fusion technology and the Tite Liner® powered roller box was a fundamental key to the success of this project. United Pipeline Systems recently debuted an upgraded roller box with fully powered hydraulics for diameters over 20 inches. The roller box installation technique combined with the physical and chemical properties of HDPE PE100 materials convinced the client that Tite Liner® was the ideal solution to successfully install the liner in a single continuous 8,200-ft length.

There were a variety of challenges associated with the project in addition to the record-breaking length. First was the jobsite footprint. Limited space on the island necessitated that all the works related to the host pipeline as well as the HDPE liner were to be carried out offshore. Additionally, the project timing was not favorable. The only available weather window was during the summer, where the HDPE pipe surface was measured midday at 80°C, or 176°F. Therefore any attempted pull would have to be performed at night in order to avoid extreme heat.

In addition, fusion joint welding of the HDPE pipeline was performed on a work barge tied to the pipelay vessel. Each 50-ft length of HDPE pipe was assembled into larger 150-ft sections on the work barge. A watertight towing head was then fused to the lead 45m length, and attached to the winch located on a tug. The tug would tow and guide the string of pipe, along with buoys to keep the pipe afloat, with the assistance of the work boats. The sea conditions required that the control of the pipe had to be decisive, as any over pulling by the tug would result in damaging the HDPE. Owing to the combined expertise of VMGL, USTS fusion and marine crews, the fusion operation was performed successfully.

One other issue was location. As a result of the steel pipe location, it was necessary to assemble the equipment inside the welding tunnel of the pipelay vessel. Additional structures and reinforcement supports were added and the tunnel roof was modified so that it could be removed. This enabled the equipment to be positioned and safely restrained to prevent any movement during the insertion.

Following the fusion jointing and testing, the HDPE pipe was positioned on the pipelay vessel with the pipe entry point at roughly 20 feet above the sea surface. A special entry chute was actually constructed to ensure that the joints of the pipe were not overstressed during the pull.

At the time of installation, the winch pack was positioned on Halul Island and radio communication established. The preparation for the insertion started at 8pm. Once preparation was complete, the liner insertion commenced at approximately 2am and the entirety of the liner was installed by 6am.

The produced water disposal pipeline now has internal corrosion protection from end to end to ensure it remains operational for its entire service life.

Schell added, “Every detail had to be attended to in this critical offshore environment where there is no margin for error. We faced many challenges but in the end we were successful.”