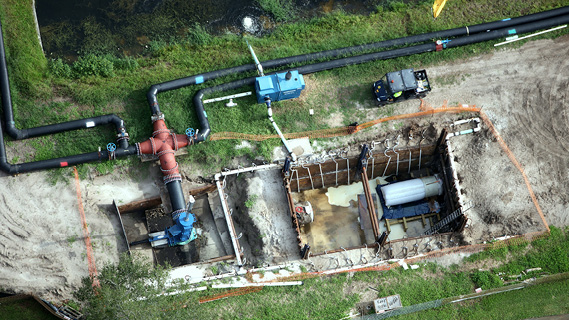 The City of West Palm Beach, Florida recently embarked on one of the largest projects of its kind to rehabilitate a 40+ year old PCCP force main using a fiber-reinforced cured-in-place pipe solution.

Work on the project began in the summer of 2016 to rehabilitate the primary force main carrying the entirety of the sewage flow for the City of West Palm Beach and Town of Palm Beach to the East Central Regional Water Reclamation Facility. The facility treats up to 70 million gallons of water per day for approximately 100,000 residents of West Palm Beach. A condition assessment concluded that the number of pipe segments with broken wire wraps – with breaks ranging from 5 to 100 broken wires per 20-foot segment – provided a significant risk of failure.

With a maximum average operating pressure of 25 psi and surge pressure of 35 psi, the pipe required a structural solution. Together with Jacobs Engineering and West Palm Beach, the project was designed with materials to withstand the required pressure rating of the 48-inch diameter line.

For this type of project, open-cut or traditional sliplining is normally used. However, open-cut was ruled out due to project costs and disruption to homeowners and the golf course due to removal and replacement. It was also determined that traditional sliplining would result in too great of a diameter reduction for the flow capacity of the line. InsituMain® CIPP, was selected to rehabilitate the pipe. This is one of the first rehabilitation projects to use fiber-reinforced CIPP at this pressure, diameter and length.

The bypass and installation footprint traveled across the fairways and through the ponds of Bear Lakes Country Club, a condo parking lot and common grounds, roughly a dozen backyard easements of houses on the golf course property, along a canal and through a middle school easement. Minimizing risk to both homeowners and the community were integral to the success of the project. In order to provide up to date and proper communication with the very strict homeowner's association and surrounding community, Insituform contracted with a local PR firm to provide information about work schedule and potential community impact, answer questions and address any other communications-related issues that might come up throughout the course of the work.

Since this force main is so critical to delivery of sewage waste to the treatment plant, it was not able to be diverted or shut down for any length of time. Therefore, a bypass system was set up prior to installation by Sunbelt Pump & Power Services. The bypass plan was designed using the upstream driving pressure from the city's existing pump stations to move the flows, eliminating the need for in-line pumps. Once the bypass plan was approved, pits were dug by excavation contractor D.S. Eakins and Sunbelt was able to begin work on the bypass in June 2016.

To install the bypass piping, the force main was hot-tapped at the upstream and downstream ends by linestop contractor Rangeline Tapping Services. This process attached the valves that were used to connect to headers with the bypass piping without taking the primary PCCP line out of service. Once the valves were attached, four 24-inch HDPE lines running the entirety of the project at 5,700 linear feet each were attached.

While three lines were sufficient for the flow required, a fourth line was used to provide an added redundancy and safety factor. The InsituMain® CIPP liner was impregnated with epoxy resin at Insituform’s wet out facility in Indianapolis and then shipped to Florida for installation. Once received, the tube was able to be put in the ground at a rate of about one shot per week using water inversion and hot water cure. The project was broken up into six separate shots, with the largest install measuring over 1,100 linear feet in length.

Post-installation, the force main was reconnected to the rest of the system and pressure testing was commenced to verify that the line could withstand the normal 25 psi operating pressures and 35 psi surge pressures. Successful pressure tests were conducted on each segment and again on the entire length of the rehabilitated system at 55 psi and the line was put back into service in early October 2016.

InsituMain® CIPP was installed on schedule with minimal impact to residents and the community. No modifications had to be made to the system and there was little to no impact on service for the surrounding community.

This project was named Project of the Year by Trenchless Technology in 2017.