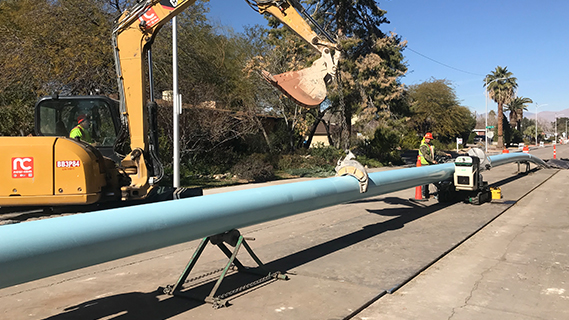 The Las Vegas Valley Water District (LVVWD) is a not-for-profit government water supply agency that delivers water to more than one million people in southern Nevada, including Las Vegas and other unincorporated communities within Clark County. The district began operations in 1954 and built the infrastructure to draw water from Lake Mead on the Colorado River instead of depending on the limited groundwater provided by the springs in the Las Vegas Valley. This additional resource allowed Las Vegas to become one of the premier resort destinations in the world.

LVVWD’s Uniform Design Standards requires independent trenches and 10 feet of separation between parallel lines of potable water and storm or sanitary sewer lines to maintain healthy water standards. When this separation distance is impractical, LVVWD uses other methods to keep their water lines secure. One method uses Fusible PVC® pipe for the water and/or sewer lines. Fusible PVC® pipe is an AWWA C-900 PVC pipe that is joined with thermal butt-fusion, creating a gasketless system which limits entry points for unsanitary ground water, fulfilling the district’s requirement for line separation.