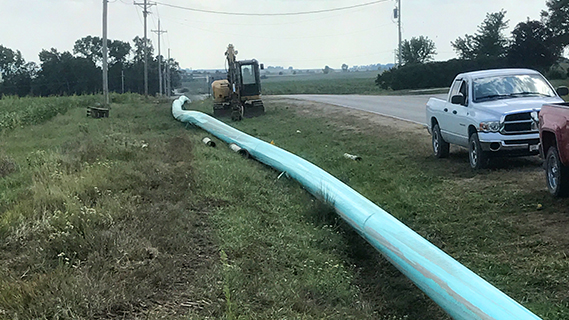 The city that is now Gretna began to develop shortly after the Burlington Railroad built a short line between Omaha and Ashland in the summer of 1886. The Lincoln Land Company, recognizing the potential of the area, surveyed and plotted the town site of Gretna in 1887 and the village was incorporated as Gretna by the summer of 1889. The name suggests Scotland's Gretna Green, the ancestral county of some of the earliest settlers of the region.

Gretna continues to grow and evolve 127 years later. Roughly 1,400 acres south of Gretna, between the city and Interstate 80, were earmarked for development in 2016. This area is at a lower elevation than the rest of the city, but it made sense to incorporate the sewer collection and treatment into the existing system. Gretna officials procured the services of Olmsted & Perry Consulting Engineers, Inc. to perform the design. Sewer flows would be collected and pumped through a force main and back to the existing system for treatment. Principal and Project Engineer, Greg Perry, chose horizontal directional drilling (HDD) as the primary method of installation for the force main.