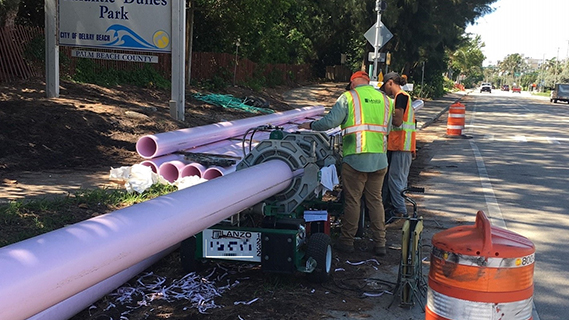 The city retained Mathews Consulting, a Baxter & Woodman Company based in West Palm Beach, to develop a reclaimed water master plan and to implement various reclaimed water transmission and distribution system design projects. In previous phases of this project, Mathews Consulting chose to utilize horizontal directional drilling (HDD) to install certain sections of the reclaimed system and in specific areas of the alignment, including road, driveway crossings and other areas to reduce surface disruption and corresponding restoration costs. Fusible PVC® pipe was the specified pipe material for these segments, providing a fully-restrained, jointless PVC pipe that is made to the same AWWA C900 standard as bell-and-spigot PVC pipe.