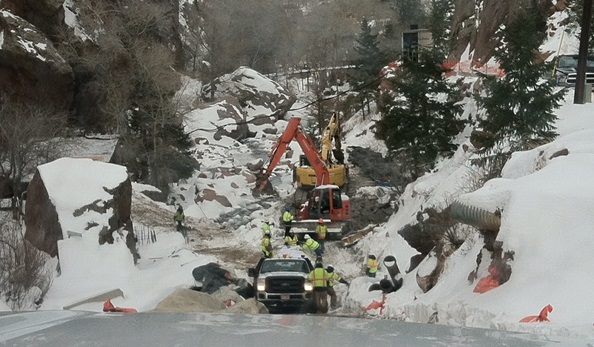 The Eldorado Springs project was precipitated by extreme flooding in Colorado in September 2013. FEMA was quick to act as many foothill communities and towns had suffered catastrophic damages, with property damages estimated at more than $1 billion. Part of the rebuilding effort included repairs to water systems and sustainability improvements.

Part of that effort included roughly 1200 lineal feet of 12-inch pressure pipe rehabilitation. Extensive evaluation of the pipeline completed after flooding had shown that the 40+-year old pipe was pitted with pinholes and would soon require repair or replacement. The inaccessibility of the line prompted the City to choose trenchless rehabilitation for the line's repair. Insituform’s glass-reinforced InsituMain® CIPP product was selected to rehabilitate the water line.

The steel raw water line, pressure-rated at 45 psi, runs parallel between the mountainside and South Boulder Creek – basically along the side of a mountain. Hand-laid more than 40 years ago, the water line runs under the trail at the far side of the canyon. Access is difficult because there is an approximate 30-foot vertical drop between the road and the pipe.

Installation was scheduled for December as the creek flow was low and could be diverted  and contained within a 24-inch casing pipe. Additionally, most of the equipment had to be craned over the river from the road using heavy equipment. The Insituform crew working on the installation had an extremely small jobsite footprint to work with – roughly the size of a standard hiking trail.

The project was divided into two shots, each roughly 600 feet in length. The first installation started upstream at a sand trap structure being rehabilitated by the general contractor. The access to the first shot required a temporary ramp to be built from the park access road down to South Boulder Creek.

In order to do the second shot, an intermediate pit had to be dug for the CIPP installation. Inversion of the second shot was completed quickly due to the 75-foot slope, but careful attention had to be given as there were a number of 11-degree bends down the line. The CIPP portion of the project was completed in three days in December 2015 to the client’s satisfaction.

The project was named the 2016 Runner Up for Trenchless Technology magazine's annual Project of the Year awards in the Rehabilitation category. Click HERE for the full article.

The Eldorado Springs Pressure Pipe Rehabilitation project was named the 2016 Runner Up for Trenchless Technology magazine's annual Project of the Year awards in the Rehabilitation category.