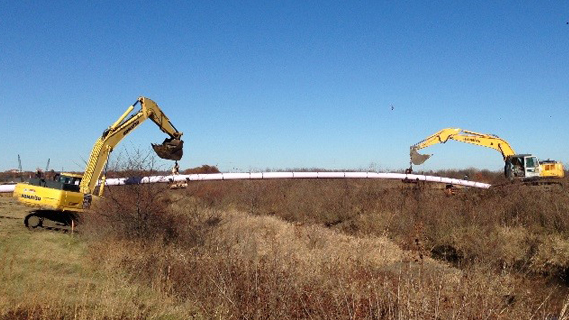 In 2013 the City of Lawrence published a request for proposal (RFP) for design services for the Wakarusa Wastewater Treatment Plant (WWTP). That RFP also included the design of a major pump station (PS10) and parallel force mains to convey significant amounts of wastewater to the new plant.

The proposed WWTP would be located in close proximity to the Wakarusa River, a tributary of the Kansas River, that runs along the south side of the City of Lawrence. As a result of the existing topography much of the area between PS10 and the WWTP is wetlands. While the preliminary design report had envisioned a force main alignment that would avoid these wetlands, significant savings could be achieved by crossing them. Crossing this environmentally sensitive area would require large amounts of trenchless installation, but the savings available based on less constructed pipe in combination with reduced pumping requirements and long term energy usage would be over two million dollars.