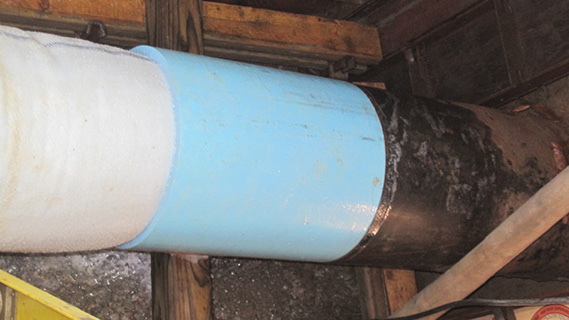 Communities throughout North America share a common goal of preserving not only their heritage, but also the infrastructure that preserves clean water beneath the ground. Pipeline infrastructure maintenance in historic areas is especially sensitive when it comes to choosing a repair or renewal solution.

The City of Decatur, Illinois had the task of choosing a solution when three water main breaks had caused temporary road elevation due to flooding, subsequent depression and warping of the original brick pavement on historic Macon Street near the Millikin University campus. In a historic area, the road had to be preserved or repaired to its original state while undergoing necessary repairs and rehabilitation. This called for a solution that would not disturb the existing streets and minimize disruption.

InsituMain® CIPP Over 600 feet of the original 12-inch cast iron water main, installed in the 1940s, was renewed using the InsituMain® CIPP. InsituMain® CIPP uses a fiber-reinforced cured-in-place pipe (CIPP) to give added strength and provides a structural solution for mains that have experienced pinholes, leaks or other failures.

Since it utilizes a CIPP process, InsituMain® CIPP requires only minimal digging making it less disruptive than traditional methods of rehabilitating and replacing pressurized lines. Rated by the AWWA as a Class VI solution, InsituMain® CIPP provides a fully-structural solution that can handle pressure ratings up to 150 psi. Fully-structural means it handles not only internal pressures, but also the external loads of the pipeline. It is also certified to NSF/ANSI Standard 61, making it suitable for potable water and drinking water pipelines.

In just one day, the 600-ft. section of InsituMain® CIPP was inserted into the host pipe using a water inversion process and cured using hot water. It was then left to set overnight and reconnected back into the system the following day using standard Hymax® fittings.

After service was restored, the excavation pits used for insertion were filled and the road repaved using the original brick pavement.