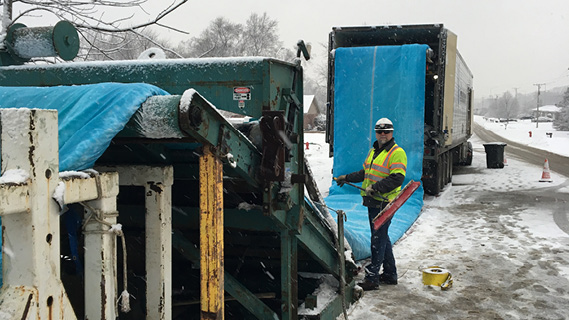 During regularly scheduled sewer cleaning and maintenance by the MWRD in 2014, the Calumet intercepting sewers were inspected via a closed-circuit television (CCTV) system according to NASSCO standards. The subsequent videos showed large amounts of infiltration as well as massive concrete/metal deterioration due to hydrogen sulfide being present in the large-diameter intercepting system. The district evaluated two technologies to restore the hydraulic and structural integrity of the sewers: slip lining and cured-in-place pipe (CIPP). After further evaluation, CIPP was determined to be the most effective technology on this project due to its low social costs and economic benefits.

In addition to lining over 14,000 feet of 60-inch diameter pipelines, 23 manholes and a junction structure of particular importance and complexity on this project, the project required a 28,000-foot bypass pumping system. To properly install and cure the complex 60-inch CIPP liners, a trustworthy bypass system was needed to handle the peak flows of approximately 30 million gallons per day. This system was compromised of twin 14,000-foot 24-inch and 32-inch diameter pipelines that traversed over numerous creeks and paths in order to provide a measure of redundancy should the district experience flows higher than originally anticipated.

In addition to traditional large-diameter CIPP, 20 percent of the pipeline was rehabilitated using Insituform's iPlus® Composite system, a fiber-reinforced CIPP product for medium- and large-diameter pipes that provides added strength and stiffness.