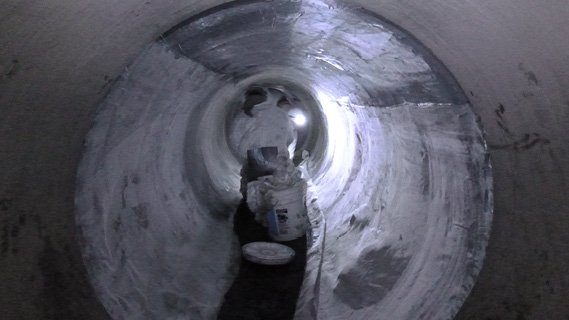 A 48-inch cast iron water main was installed in the Brookline area of Boston in 1870 to provide additional potable water supply to residents. Almost 150 years later, this pipeline today now supplies over 21 million gallons (or approximately 15 percent of the total daily water supply) per day to the region. In 2000, the Massachusetts Water Resources Authority (MWRA) performed maintenance on the pipeline and relined it with a non-structural cement mortar lining. Unbeknownst to the agency, the cast iron pipeline had begun to experience stress related cracks, which were covered up during the cement mortar lining operation. Six years later, the MWRA experienced a major pipeline break that required light rail tracks to be removed in order to excavate and replace the damaged pipeline. Because of the importance of the pipeline as well as its sensitive location, the MWRA determined it was in their best interest to repair or replace this pipeline prior to another catastrophic failure.

The engineer's evaluation determined that replacement of the pipeline was not feasible due to its proximity to the Massachusetts Bay Transportation Authority's "Green Line." This light rail transportation system completes more than 300 trips per day, aiding residents and visitors traveling into and out of Boston. Because of this, the engineer and the Authority evaluated trenchless methods capable of handling the external soil and light rail loading as well as the ~150 psi internal water pressure. The team assembled three specific goals that the trenchless methodology needed to meet in order to be the best possible solution:

The initial evaluation compared eight products and processes, including four Aegion pressure pipe product offerings. After thoroughly reviewing each against their specific goals, the engineer and the Authority identified three products as technically feasible. These three solutions were then further evaluated based upon cost.

After the multi-year technical and cost evaluation, the engineer and the Authority decided unanimously upon the use of the Tyfo® system due to its ability to repair a short section of pipeline (72 feet long) without the need to provide nearby access. Since it could provide access in an open area nearly 1,400 LF away from the damaged pipeline, the Tyfo® system was roughly one-third the cost of steel or HDPE slip lining.

The cast iron water main was rehabilitated by Fibrwrap Construction for the MWRA using Tyfo® SCH-41-2x on-time and on-budget. This example demonstrates the flexibility offered by the Tyfo® system compared to other trenchless rehabilitation systems in large-diameter potable water mains.