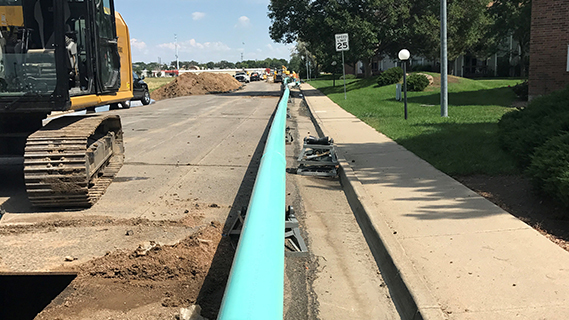 The city of Westminster identified just over 3,000 feet of an abandoned 8-inch pipe that was needed to provide a functional, redundant force main for the city’s 88th & Zuni Lift Station. The abandoned pipeline had failed in the past and the city had relied on another force main to serve the lift station. However, having redundant force mains is key to the city’s standard of protecting public health and safety. While the city’s records indicated this 8-inch pipeline segment was comprised of cast iron, investigation and potholing efforts to verify it were inconclusive.

The city hired Kennedy/Jenks Consultants in Lakewood, Colorado to prepare design and construction documents for a project to rehabilitate the pipeline along the existing easement and alignment with a pipe bursting operation. Locating the existing pipeline along part of the route was unsuccessful so a bid alternate to allow horizontal directional drilling (HDD) instead of pipe bursting was included. The city and Kennedy/Jenks required Fusible PVC® pipe to be used as the replacement pipe material, regardless of which trenchless method was utilized, based on past successes with the material.