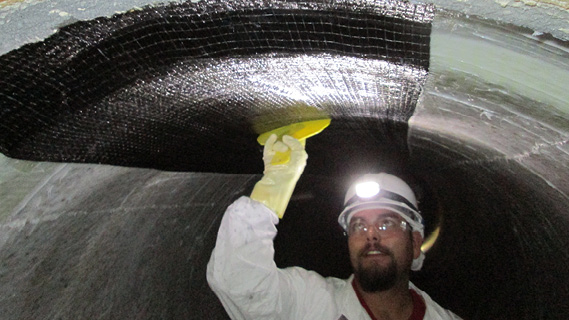 In March 2013, Washington Suburban Sanitary Commission (WSSC) contracted a third party inspection company to perform an electromagnetic survey to assess the condition of their 2,990 feet of 66-inch PCCP pipeline. It was found that numerous sections of the inspected 66-inch line had broken pre-stressed wires and were structurally unsound. Thirteen of these pipe sections were in the vicinity of Interstate 270. WSSC conducted feasibility studies and determined the traditional remove-and-replace option for these distressed pipe sections would not be practical and contacted Fyfe to consider a carbon fiber reinforced polymer (CFRP) retrofit of the damaged segments of pipe.

The Owner decided to rehabilitate the deficient pipe sections with CFRP, which has been introduced as a repair alternative for failing pipe sections and joints as well as other emergency applications that afford a shortened construction schedule, minimal curing time and immediate return to service conditions and pressures.

Fibrwrap Construction installed the Tyfo® SCH-41 2X system (unidirectional carbon fiber) both in the circumferential and longitudinal directions. The materials were designed as a standalone repair to withstand operating and transient pressures as well as gravity loads.